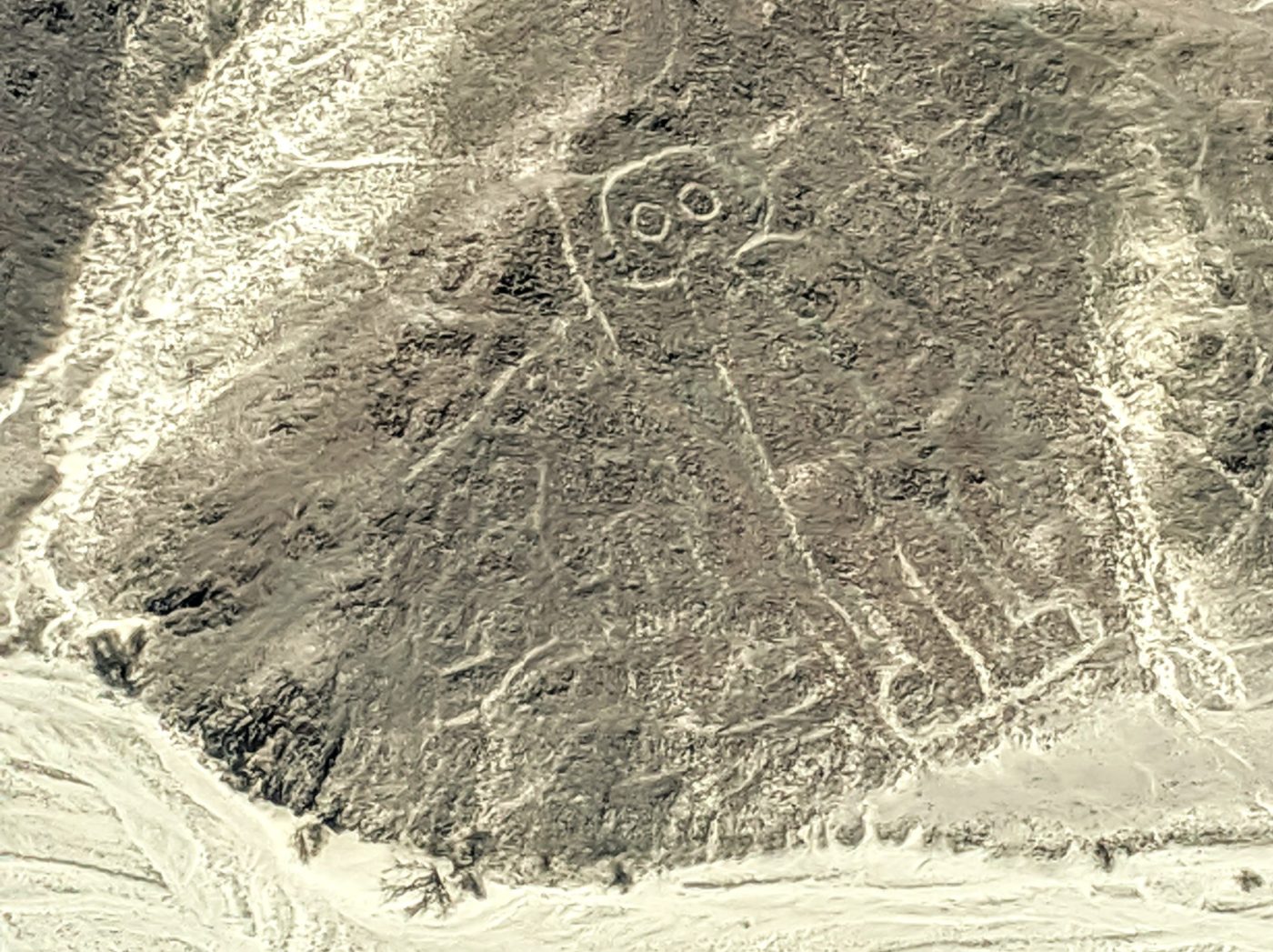 Being in Peru, you must not miss one of the most mysterious ancient sites in the world: the famous Nazca Lines.

What are the Nazca Lines?

The Nazca Lines are a group of pre-Columbian geoglyphs, etched into the floor of the Nazca Desert in Southern Peru. Covering an area of nearly 170 sq. miles, it contains over 70 different figures, which represent animals and plants. The figures are huge! Some of them measure as much as 1200 feet in length. There is also a strange humanoid figure called the Astronaut with one of his arms raised as if he waves at you. Besides the figures, there are over 300 triangles, trapezoids, rectangles, spirals, wavy lines and over 800 straight lines, some of which are as long as 30 miles.

The most mysterious thing about the Nazca geoglyphs is that you cannot see them if you stand on the ground. All you see are stones and a flat desert floor. Some pieces are possible to make out from the nearby hills, but the only way to really see the giant lines and figures is from about 2000 feet in the air.

How the Nazca Lines Were Discovered:

The earliest mention about the Nazca Lines occurred in 1553, when a Spanish chronicler, Pedro Cieza de Leon, mistook them for trail markers. But exactly due to the fact that the geoglyphs can only be visible from the sky, no one really discovered them until the age of airplanes, the beginning of the 20th Century.

Even time didn’t destroy the ancient wonder. The Nazca desert is the perfect place for preservation: it never rains and winds are high enough to never let the dust settle and cover the drawings.  However, human activity did damage some of the Nazca Lines: for example, one of the figures, the Lizard, was cut in two by the Pan-American Highway. No one even noticed that they were building over an ancient treasure!

Since the discovery, many scientists studied the Nazca Lines. Some of them, such as a German-born Peruvian archaeologist Maria Reiche, dedicated all their life to deciphering the mysterious geoglyphs!  However, even now, there are only speculations about their meaning and purpose. No one really knows.

Who Created the Nazca Lines and How Did They Do It?

It is believed that the majority of the Nazca Lines was created by the Nazca people, who lived in this area from around 100 BC to approximately 500-700 AD.  Some of the Lines were allegedly made even earlier, by Chavin and Paracas cultures.

To create the drawings, the ancient people dug trenches by removing the top 4 to 6 inches of the darker brown-gray top layer of soil and pebbles revealing the lighter yellow sand below. What an enormous job it must have been, and I haven’t even mentioned the planning it must have taken to execute such a giant project!

This is, in my opinion, the most important question anyone should ask when exploring any ancient monument. Especially those making no sense! Yes, it was hard enough to create the Nazca Lines, but the question “why” is the one that could really reveal some extraordinary answers.

OK, we have a bunch of ancient people, whose lives were very difficult in this harsh desert climate. They must have had their hands full just with everyday survival tasks. Instead, they spent so much of their valuable time and effort digging dirt and creating giant pictures on the ground that no one could see! Why? What for?

Here are some official theories that attempt to explain the purpose of the Nazca Lines:

Water markers?  Really?  If I were making a water marker, I would definitely make it so my fellow people could see it. Out of all these theories, the most viable seems the one Maria Reiche came up with: an observatory. But then again, why? Didn’t these people have anything better to do?

Why to build something no one can see? Sometimes I feel that these theories are only created because it is necessary to explain the unexplainable, so the scientists try to come up with anything that may stick.

What could Nazca Lines Possibly Be?

First of all, even the fact that the Nazca culture is responsible for the creation of the Lines, is questionable. Usually when scientists attempt to carbon-date an ancient monument, they look for something organic around it. One cannot carbon-date stone.  Or giant geoglyphs on the ground.  So, they date bones, pottery or textiles they find around the object. But it doesn’t prove that the object didn’t exist before these people came and left the organic evidence. It might have been there thousands of years before.

But no matter who actually made the Nazca Lines, I am a strong believer that these animal and humanoid figures, these complicated geometrical forms, lines and signs were meant to be seen.  Not only that, they were meant to be interpreted and understood. They carried a message, which was so important, that an enormous effort was made to send it.

Who was the message for? If it was meant for someone in the sky, someone who possessed the power of flight in the distant past, does it mean it was meant for gods or for the extraterrestrial beings who had been frequently mistaken for gods?

What is this message?  Is it information and if so, what kind? An alien navigation map? A cry for help?

Tourists generally want to see the animal figures and the Astronaut, but what do the triangles, trapezoids and lines mean?  A theory that those lines could be runways doesn’t hold because the ground is too soft. Plus based on many other legends, the extraterrestrials knew vertical flight. So those must be some coded messages, too. Can we figure out what they are? Mathematics is the universal language, so could it be that the intricate geometry of the Nazca Lines contains mathematical clues?

There are more questions than answers, but that is normal for a place like this.  Just like all the other mysterious places, all we need to do is to look at the Nazca Lines with a fresh eye, not clouded by the academic dogma. Maybe then we can see something, maybe a hint.

The Nazca Lines are actively being studied; new figures are being constantly discovered, even today. Some of them could only be discovered using modern technology. So there’s hope that one day they will tell us something more extraordinary.

The Best Way to See the Nazca Lines:

People who travel through Peru often bypass stopping in Nazca, reducing their Nazca Lines experience to climbing up the Nazca Tower.  This 39 foot German-built tower, donated by Maria Reiche, is located right on the side of the Pan-American Highway and allows you to see three geoglyphs:  the Hands, the Tree and the unfortunate Lizard, cut in two by the road.

So, as you can see, the experience is far from perfect!  To really enjoy the Lines, I strongly recommend taking a flight. In the end, we know that you can really see them in all their glory only from the air!

Preparing For the Flight Over the Nazca Lines

You can easily book your flight online.  Keeping safety in mind, I would recommend choosing a reputable airline, such as one of the leading operators:  AeroNasca. You need to choose the date and time of your flight at the time of booking. As far as I understood, even though there are warnings that the dates and times are final, in the low season it is rather easy to change them, if you need to do so. However, try not to risk it!

The best time to fly is in the morning. The earlier the better, because wind generally increases later in the afternoon and can cause uncomfortable flight conditions. It is especially true for those who easily get air-sick!

This 35 minute flight costs $80. Additionally, the airport charges a fee of 30 soles (about $10), paid separately. It is important to bring your original passport! You will be flying from a small, but nevertheless, real airport, where all the procedures are in place, such as passport control and security check. Because of the weight restrictions, anyone over 90 kg (200 pounds) will have to purchase two seats. They actually weigh you at check-in!

The flight covers 12 of the most famous Nazca Lines, including the Monkey, the Dog, the Hummingbird, the Condor and the Astronaut, as well as numerous lines, trapezoids and spirals. The pilot flies over each figure twice, so passengers on either side of the plane can view them properly.

At the end of the tour you get a flight certificate and, if you want, a souvenir stamp in your passport.

Besides the classic flight over the Nazca Lines, you can buy an extended tour that lasts an hour and adds Palpa Lines with its famous Sun Star. However, prepare to pay around $200-$250 per person for this flight, depending on the season.

Some Other Geoglyphs like the Nazca Lines in the World: